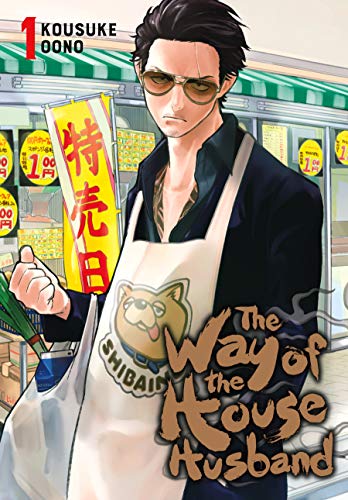 If you’re in the market for a good husband, consider a former Yakuza. I’m convinced this manga, The Way of the Househusband, is pro-Yakuza propaganda. If it is, then it’s very good pro-Yakuza propaganda. This slice-of-life manga’s comfortable premise helped convert me into a fan of a genre I originally despised. After all, the slice-of-life genre has a reputation for throwaway plots: they’re cute and make you feel good, but there’s no depth. The Way of the Househusband is an exception, and a very wholesome one at that.

The Way of the Househusband pulls you in with its enigmatic protagonist: Tatsu the Immortal Dragon. There’s a certain charm to Tatsu—a je ne sais quoi—that makes him such a lovable character. Volume 1 dedicates its first few pages to what Tatsu was like, briefly showing his storied career as a violent assassin. What immediately follows is a reformed Tatsu, a man whose new path in life includes coupon clipping, meal prepping, and house cleaning. His first adventure follows him realizing he forgot to give his wife the boxed lunch he made her, so he hops on his bicycle and races to her place of work. The police stop him, confused at how a man who so clearly looks like a Yakuza would be riding a bicycle. Tatsu manages to escape their questioning, and then we’re onto the next story. This manga isn’t plot-heavy, focused instead on the comfortable characters, setting, and scenarios. The Way of the Househusband doesn’t want to make you sit on the edge of your seat, it wants you to sink further into it. Each chapter is about 8 pages long, and the intensity of the drama is kept to a minimum. The manga’s most intense moments include Tatsu’s mad-dash to the grocery store, hoping to take advantage of a random flash sale.

That’s not to say there isn’t conflict, far from it. Tatsu’s wife, Miku, is a full-time businesswoman. There are moments in the manga that indicate Miku is not only the head-of-household thanks to her job, but also thanks to her fiery personality. Tatsu expresses his fear of upsetting “The Boss,” a term of endearment he uses for his wife. Tatsu also finds himself encountering his former Yakuza members who express their confusion in his newfound love of crafts, DIY kits, and cooking. His charming personality and supremely detailed crafts help him survive a would-be messy encounter with a rival Yakuza gang, where he offers them a rubber duck. Ultimately, it’s his experience as a former Yakuza boss that helps him be such a great househusband.

Each volume outdoes the last, and Tatsu begins to win over the hearts of other Yakuza who are doomed to forever live a life of crime. Whatever happened to Tatsu made him realize that being a Yakuza and being a househusband are one and the same. He befriends a group of housewives who become his crafting and cooking mentors. He attends cooking classes in hopes that he can make a delicious meal for his wife after work. It’s all serious business for Tatsu, and one of his former partners in crime takes note, eventually leaving the Yakuza entirely to become his student. Despite Tatsu’s rough looks and delinquent past, The Way of the Househusband shows that he has plenty of love to give.

My favorite chapter of this manga has Tatsu babysitting his neighbor’s son who just wants to have fun. What follows is Tatsu realizing just how difficult entertaining a child is. Without going into much detail, Tatsu tries to use what he learned as a Yakuza to entertain the kid. It doesn’t go over well. Like all chapters— of course—it’s all resolved in the end, thanks in part to Miku’s timely return home, but it’s a good example of the manga’s strong characterization. Tatsu has a good heart, and despite his inexperience with kids, just wants the boy to have a good time. He knows his limits, realizing that he’s in over his head and tries to find an alternative to what he’s already trying. He’s sensitive, which allows him to bond with the kid. He lacks self-awareness: he truly doesn’t realize just how scary his face is. All of these little facets of Tatsu combine to make what is a very compelling, loveable househusband.

As of my writing this there are six English volumes of The Way of the Househusband, with the seventh releasing next year, January 18th. Additionally, there’s a brief live-action adaptation that can be watched on YouTube (made for advertising) and an anime that just had its second season. Each volume of the manga can be enjoyed on its own, but they build on each other to create a truly enjoyable story. There are recurring characters with their own character arcs, and Tatsu grows on you with each new chapter. He’s a simple man who found fulfillment in wearing an apron and perfecting his omelet recipe. He’s a responsible cat owner, a diligent money saver, and a truly loving husband. If he wasn’t already taken, he’d be the world’s most eligible bachelor. The Way of the Househusband is a must-read for anyone who needs a simple, wholesome story. Let your heart and cheeks be warmed by Tatsu and Miku’s adorable marriage—and if that isn’t your kind of thing, they have an unbearably cute cat. And did I mention that he cooks a mean omelet?